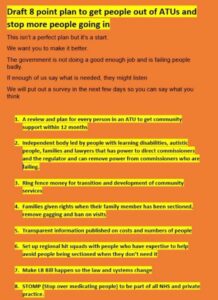 The 8 point plan is a crowdsourced plan that states the basic action that needs to happen to ensure the human rights of autistic and learning disabled people forms the basis of the care people need.
1. A review and plan for everyone in an in-patient hospital to get community support within 12
months or sooner;
a. Including a strengthening and greater focus on the use of Community Treatment Reviews CTRs and Community and Education Treatment Reviews CETRs;
2. Steps should be taken by all responsible bodies to ensure that individual’s rights under
existing legislation are being met and that public authorities and publicly funded bodies are
meeting their statutory responsibilities;
3. The establishment of an independent body led by people with learning disabilities, autistic
people, families, lawyers and representatives of key stakeholder organisations, that has the
remit to monitor and hold responsible bodies to account, in accordance with the
requirements of existing legislation.
4. Increased funding and investment in community services, preventative support and in the
transition from inpatient hospitals.
a. Including the funding of specialist teams (Hit Squads) with people who have expertise to
help stop people being detained under the Mental Health Act.
5. Families’ and friends’ right to visit, when a family member or friend has been detained under
the Mental Health Act 1983, being properly enforced and work undertaken to prevent the
misuse of current legislation by providers and commissioners in inappropriately silencing
and gagging families, friends and advocates;
a. Including the right to speak publicly about an individual’s detention in accordance with
current legislation where this is with their consent or in their best interests;
6. Information and transparency about local area and national plans to support and meet the
needs of people with learning disabilities and autistic people, the numbers of people in
inpatient hospitals, where they are, how much money is being spent and by which
commissioners.
7. STOMP (Stop over medicating people) to be part of all NHS and private health care practice.
8. In the longer-term, support legislative change to strengthen people’s right to independent
living and a life free from the threat of detention, with community alternatives to hospital
care:
a. Drawing on the principles outlined in the Draft Disabled People (Community Inclusion)
Bill 2015, also known as “the #LBBill” so that laws and home admission considered first;
b. The United Nation’s Convention on the Rights of People with Disabilities;
c. Giving CTRs and CETRs statutory powers;
d. Including strengthened rights to advocacy and independent support for people without
families or whose families are not involved in their lives;
e. Rights to peer advocacy and visits from friends and people who know them well;
f. And strengthened rights for families whose family members have been detained.

More about the 8 point plan RL-8-Point-Plan-V5